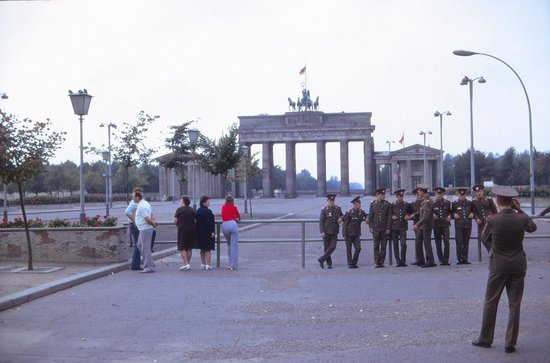 The international arena and Berlin's place on it changed significantly at the end of the decade. Both superpowers hoped for a thaw in the Cold War and a modus vivendi, while the elections in West Germany brought to the office of the Chancellor a man who wanted a rapprochement with the GDR. 27 February 1969 US President Richard Nixon, during his visit to Berlin, called for the alleviation of international tensions. Shortly thereafter, talks of the four powers were held in the Allied Control Council building. Delegates decided to put aside the broader topics of German-Soviet relations and create a security conference in Europe in order to work out an effective agreement on the status of the divided city.

The result was a four-party agreement – (3 September 1971), followed by the December agreements between the two German states on transit routes to West Berlin and border regulations for its inhabitants. It was largely the result of the efforts of Willa Brandt, which Ostpolitik aimed at the normalization of relations between the two German states. W 1970 In the year, treaties were signed with the Soviet Union and Poland, recognizing the border on the Oder and Nysa. And finally in 1972 The Federal Republic and the GDR signed the Basic Treaty. Although it does not include the full recognition of the GDR. however, this obliges both countries to respect each other's borders and de facto sovereignty.

In return for the allegation of the Hallstein doctrine, West Germany was allowed to visit friends and relatives on the other side of the border (for the first time since short visits in the mid 60's). However, the freedom to cross the border from East to West was limited to the disabled and retired. This was a concession on the part of the new East German leader, Ericha Honeckera, who was considered “liberal”, when in 1971 he replaced Ulbricht. In addition to the desire to access Western technology, market and capital. Honecker had personal reasons, for which he wished closer relations with West Germany; his own family lived in the Saarland.

In the 1970s, Berlin will gain! a new identity, breaking with old images and myths. Thanks to the easing of Cold War tensions, West Berlin was no longer a bridgehead city, and East Berlin has lost much of its sinister atmosphere. For a decade, West Berlin shared the problems of the rest of Germany: economic slumps caused by the fourfold increase in oil prices in 1974 years and a wave of terrorism directed against the establishment. West Berlin has further suffered from deteriorating housing and rising unemployment - both problems have been mitigated to some extent with West German financial assistance.

It was still relatively quiet in East Berlin. Under Honecker, the standard of living increased and there was a certain loosening of restrictions in comparison with the Ulbricht era. Even so, most people found the changes trivial in essence, and attempts were still made to escape, though now the wall was a deadly barrier. W 1977 of the year, the rock concert at Alexanderplatz turned into a brief outburst of street unrest, which the authorities suppressed with deliberate brutality.