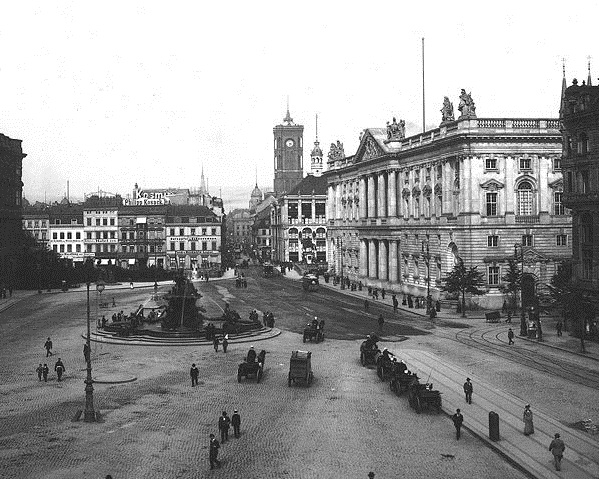 An arms race and double alliances, which gradually polarized Europe in the 1990s and the first decade of the 20th century led inexorably towards the First World War. Its outburst in 1914 year was welcomed with enthusiasm by civilians in all countries - only staunch pacifists or communists resisted the impending atmosphere of patriotism. In Berlin, Kaiser Wilhelm II spoke “to all Germans” from the balcony of his palace, and shop windows all over the city flashed with national flags. Military orchestras played in Heil dir im Siegerkranz cafes ("Glory to the winners”) i The watch on the Rhine (“Watch over the Rhine”), and the Berliners threw flowers over the German army, that is, the Reichswehr, during her march out to war, political parties agreed and even the Social Democracy voted for war loans.

General Staff's calculations, that France could be overpowered before Russia fully mobilized soon proved too optimistic and Germany faced the prospect of a war on two fronts - this is exactly what Bismarck was afraid of. As the death toll grew on the immobilized Western Front, and rationing and food shortages hit poorer sections of the population, disappointment ensued. In summer 1915 of the year, housewives demonstrated in front of the Reichstag, which foreshadowed more serious people's unrest. Ordinary people began to view war as a game organized for the amusement of the rich, at the expense of the poor, who bore all the sufferings of the war. In December 1917 the year nineteen members of the SPD announced, that they can no longer tolerate their party's endorsement of the war and founded an independent socialist party called the USPD. This party joined the Internationale Group of Karl Liebknecht and Rosa Luxemburg - later called the Spartacists - which was against the war since 1915 year. This grouping was to constitute the core of the post-war Kommunistische Partei Deutschlands, that is KPO. Meanwhile, fuel shortages, food, and even beers have exacerbated the difficulties on the internal front.

After the collapse of the last great offensive and America joining the war on the side of the allied forces, even the head of the German armed forces, Erich von Ludendorff, he realised, that disaster is inevitable by autumn 1918 year. Knowing, that the Allies will not negotiate with an absolutist state, 9 September proclaimed a democratic constitutional monarchy, whose chancellor would come under the control of the Reichstag, not the emperor. A government was formed - led by Prince Max von Baden - which agreed to far-reaching reforms. But it was too little and too late for the embittered sailors and soldiers in Germany itself, where the contrasts between privilege and poverty were sharpest. In early November, a sailors' revolt broke out in the Kiel garrison, and revolutionary workers and soldiers councils were established throughout the country

The Berliners, subjected to this wave of unrest, took to the streets 8-9 November; soldiers stationed in the capital joined them. Realizing, it's all over. Kaiser Wilhelm II abdykował. Obtained situation, which Lenin called the "dual power”. About the same time, when Philipp Scheidemann of the SPD proclaimed from the balcony of the Reichstag "the German Republic”, over a kilometer farther, Karol Liebknecht proclaimed from the balcony of the royal palace - "Free Socialist Republic”.

In the light of the growing chaos, the leader of the SPD, Friedrich Ebert, headed the government. A deal was made with the army, which was to protect the republic, if Ebert averted the broad social revolution demanded by the Spartacus League. Ebert became president of the Council of National Delegates, which ruled Berlin for nearly three months.

In days 16-21 December a congress of workers and soldiers councils was held. on which the system of parliamentary democracy was voted. Many revolutionaries among the soldiers, however, sailors and workers, who had the support of the street, it favored Soviet-style rule and refused to obey Ebert.

Ultimately, this faction was pacified by anti-revolutionary troops of the old imperial army, which increased the debt of gratitude of the Prussian establishment to Ebert. In turn, the establishment itself relied on Freikorps: armed troops of right-wing officers and non-commissioned officers, whose purpose was to protect Germany from "Bolshevism”.

The situation came to a head with the Spartacist Uprising in Berlin in the first half of January 1919 year. A pale fear fell upon the bourgeoisie, therefore she welcomed the crushing of the uprising by the militarily outnumbered Freikorps. Torture and murder of Liebknecht and Luxemburg by Freikorps officers (who dumped the bodies of the revolutionaries into the Landwehr Canal) it was not punished after the end of the fighting. It did not bode well for the future of the new republic, wherein 19 January elections to the National Assembly were held.