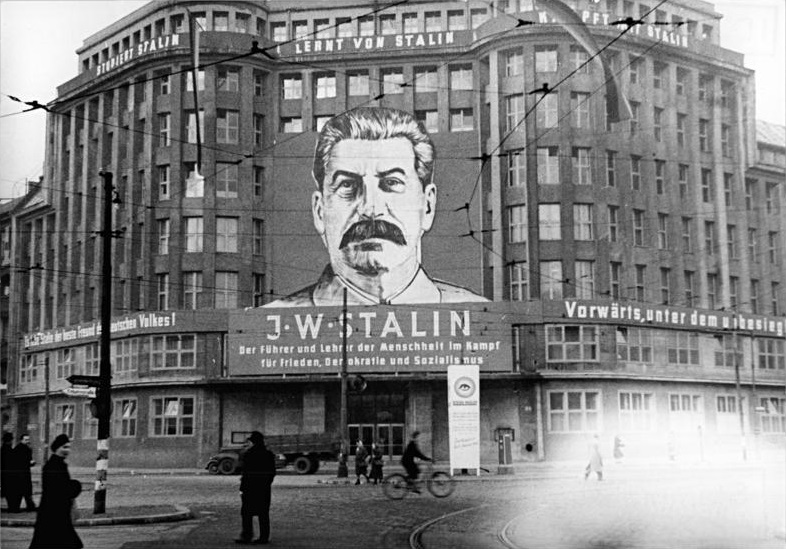 Within six months, the political division of Germany was formalized by the creation of two rival states. First, the British were connected. the French and American zones of occupation into the Federal Republic of Germany (May 1949); The Soviets responded with a formation 5 October of the German Democratic Republic. Because Berlin was deep in the territory of the GDR. its eastern part was naturally chosen the capital of this country. However, to the disappointment of many Berliners, the authorities of the Federal Republic chose Bonn as their capital. West Berlin remained under the overall supervision of the Allied Forces, although it was ultimately to obtain the status of a Land (federal state) West Germany.

Though the economic recovery was not happening as swiftly in Berlin as in the rest of West Germany, the city prospered after all, especially compared to East Berlin. The Soviets began ruthlessly plundering production assets - taking away entire factories, machines and devices for the war-torn Soviet Union - and when they finally set about rebuilding the GDR, the emphasis was on heavy industry. West Berlin soon became an attractive destination for East Berliners, who during this period were able to cross the sector boundary with virtually no restrictions. while others found employment here and used the purchasing power of a powerful Western brand. Still others went to West Berlin for entertainment and culture, which were lacking in the more Spartan east.

Political tensions were commonplace in the city, which became the arena of confrontation between the superpowers. The Soviets and East German Communists did not abandon the idea of ​​ousting the Allies from West Berlin and carried out various operations against them. The Allies, on the other hand, set up a spy network in East Berlin and organized sabotage actions. In this cradle of Cold War espionage, recruiting former Gestapo agents. SD or Abwehr seemed to all interested institutions completely justified. On the one hand, there was the British SIS (with the base at the Olimpia Stadium) and the American CIA. under whose wing the own German intelligence service was established. Gehlen Bureau, led by a former colonel of the Abwehr. On the other side were the Soviet KGB and GRU (based in Karlhorst) and the East German Intelligence Service and the National Security Service. The public reflection of this underground war was a series of minor incidents in 1952 year. An Air France plane bound for West Berlin through an air corridor was under attack by a Russian MiG; East Berlin authorities blocked the streets leading from the west to the east of the city and appropriated the land of Western Berliners lying on the edge of the eastern sector.