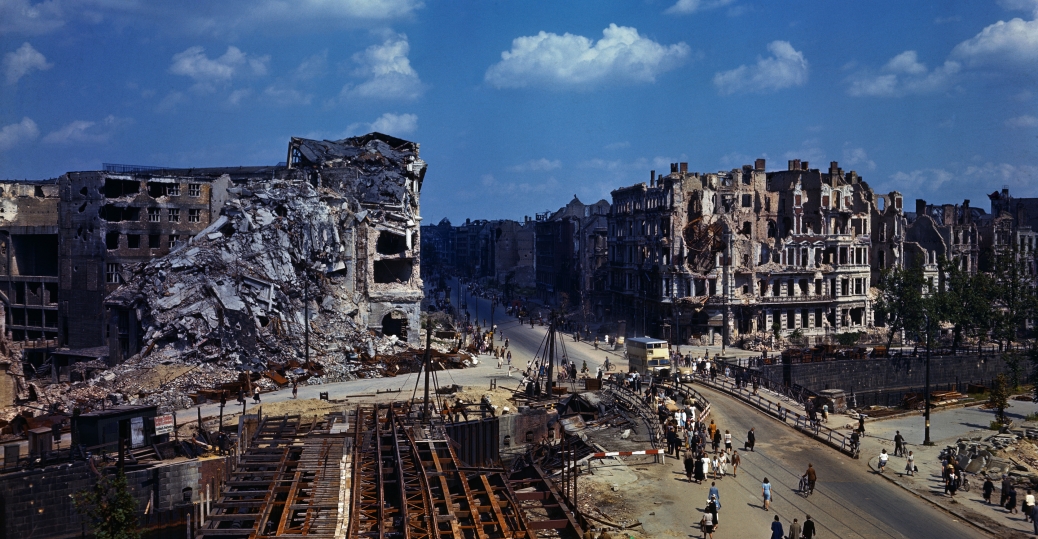 In the months immediately after the war, civilian food rations, fuel and medication have been cut to a minimum, to keep counting 2.000.000 Soviet occupation forces. Starvation rations were measured in ounces per day, if there was anything to measure at all, and civilians had to be head on, to survive. Even before the end of the war, the Soviet Union made steps towards a civilian creation, an administration dominated by communists. 30 On April, a group of German communists arrived in exile at the Kustrin airport and was taken to Berlin, where they set up a temporary headquarters in Lichtenberg. Led by Walter Ulbricht, the future leader of the Communist Party of the GDR, they started looking for former party members and created a new city government. In each district, they tried to gain communist control over education and the police. This apparatus remained in power even after the arrival of the British and Americans in July.

Western sectors of occupation were marked out by the Allies as early as 1943 year, but the troops only entered 1-4 July. When is it 50.000 British, American and French soldiers replaced the Red Army in the western part of the city. The food situation improved only slightly here, when American shipments started pouring in, but the real problem was the health of the population. Diarrhea and tuberculosis have reached endemic proportions, there were also epidemics of typhus and paratyphoid, and this condition was worsened by the terrible lack of hospital beds. British and American soldiers had a number of opportunities to get rich on the black market, exchanging cigarettes, alcohol and fuel, as well as antiques, jewelry and sexual services. The Russians had less to offer, so they just demanded, "Come on the time” and, under the threat of a gun, they took their watches. Black market trade flourished around the Brandenburg Gate and Alexanderplatz.

In days 17 On July-3 August, the Potsdam Conference took place at the Cecilienhof Palace. It was the last meeting of the Big Three of the leaders of the Allied countries. Churchill seized the opportunity, to visit the ruins of the Reich Chancellery, surrounded by a crowd of fascinated Germans and Russians. Halfway through the conference, he returned to Great Britain, to find out, that he lost the election - his place was taken by the Laborist Clement Atlee, who could only watch. how Truman and Stalin seal the fate of post-war Europe and Berlin.

For the Germans, the worst was yet to come. Agriculture and industry have practically collapsed, and the coming winter was threatened with enormous shortages of food and fuel. In Berlin, mass graves were dug and stacks of coffins were prepared for the anticipated wave of deaths, and thousands of children were evacuated to the British zone in the west of the country, where conditions were less harsh. To everyone's surprise and relief, the winter turned out to be extremely mild. Christmas was celebrated there somehow, and the mothers took the children to the first post-war Weihnachtsmarkt (Christmas indulgence) w Lustgarten.

Unfortunately, the improvement of the situation was only temporary, because despite the good weather, food supplies remained insufficient. In March, rations were drastically reduced and the weakened civilian population fell victim to typhus, tuberculosis and other hunger diseases; there. who only suffered from bowel or skin diseases could consider themselves lucky. The Allies did what they could, by sending government or private gifts, but until spring 1947 During the year, rations remained at the level of malnutrition. Crime and prostitution increased. In Berlin alone, they were arrested every month 2000 people, including many members of youth gangs. who raged among the ruins and murdered, raking and raping. Trains at Berlin stations were attacked, and outside the city, convoys with deliveries to Berlin were planned. Winter 1946/1947 year was one of the coolest in human memory. Wolves have appeared in Berlin, and people froze to death in trains. There were rumors of cannibalism, and Berlin hospitals had to heal 55.000 people with frostbite.

Meanwhile, political changes were taking place, which left a lasting mark on Berlin's post-war history. In March 1946 During the year, the social democratic SPD was forced into a marriage with the KPD, to create a SED (Sozialistische Einheitspartei Deutschlands - “Socialist Unity Party of Germany”). that is, the future Communist Party of East Germany. In the western part of the city 71% members voted against reunification; East Berlin was not allowed to vote and such attempts were made, taken at party offices in Prenzlauer Berg and Friedrichshain, were thwarted by Russian soldiers. In October 1946 the first year took place since 1933 year-wide free elections spanning the entire city. SED came out badly in the elections, while the SPD works perfectly well, which angered the authorities of the Soviet zone so much, that the practice of free elections was abandoned in the future.