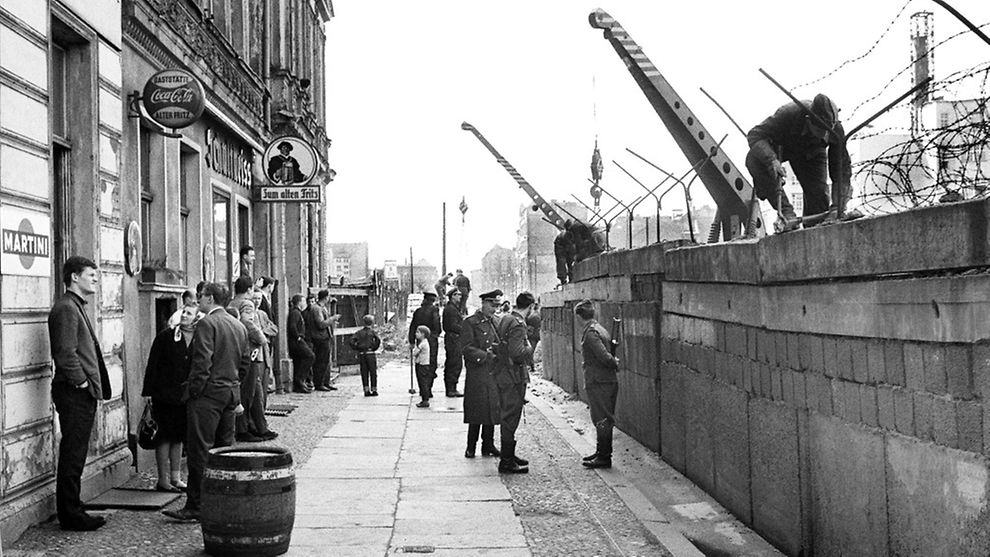 Construction of the Berlin Wall

The economic divide between East and West Germany (and their associated parts of Berlin) deepened in the 1950s. The Marshall Plan and West German capital transformed West Berlin into a flashy site for capitalism, while East Germany and West Berlin seemed to stand still. The prospects for the development of the GDR were undermined by the constant outflow of people, because in search of a higher standard of living and greater political freedom, mainly young and often highly qualified workers emigrated to the West. In the 1950s, approx 2.500.000 people, mainly across the open border with West Berlin, which was exceeded on average 19.000 East Germans for a month. Both East Germany and the Soviet Union saw it as a threat to the state's existence.

10 November 1958 Soviet leader Nikita Khrushchev demanded that Western states give up their role as "the occupation regime in Berlin, and at the same time facilitate the normalization of the situation in the GDR capital”. That weeks later, Khrushchev suggested, that the Allies should withdraw, and Berlin to become a free city, making it clear as well, that if no agreement is reached within six months, the lock will be restored. The Allies rejected this ultimatum, but the Kremlin did not fulfill its threat. Trilateral negotiations in Geneva (May-September 1959) did not work. Meanwhile, tens of thousands of East Berliners continued to cross the border with West Berlin.

W 1961 By the year Ulbricht's regime fell into a state of desperation, and rumors began circulating, that the border may be closed. In mid-June, Ulbricht felt obligated, to provide the world, that no one is "going to build a wall."”. At the same time, however, border controls were tightened. Nevertheless, the number of people leaving the NRO continued to increase and, in the words of Springer's West Berlin press,.
.. have reached avalanche proportions.” It became clear, that something will happen soon.
Shortly after midnight 13 of August 1961 East German soldiers of the year, militiamen and the Workers' Militia, they received orders to close the border with the west. 0 2.00. 40.000 people went to action, pulling barbed wire across the streets leading to West Berlin and closing the U-and S-Bahn lines, to create, as their commanders put it, "Anti-fascist protective barrier”. Many Berliners were brutally displaced from their homes, others blocked doors and windows with rolls of barbed wire and put up guards. Although the Allies strengthened their patrols, they did nothing, to prevent complete closure of the border.

Despite earlier rumors, most people in East and West Berlin were taken by surprise. There, who lived further from the border, they only found out about its closure when they failed to get to West Berlin. Crowds gathered at the border, so the guards were strengthened for security. Most people could only come to terms with the situation. Others - including a few guards - managed to exploit the gaps in the blockade and fled west. However, within a few days, the builders were reinforcing the erected barricades with brick and concrete, creating a transitional version of the Berlin Wall. The next step was the ban on the border crossing by the inhabitants of West Berlin.

THE REACTION OF THE WEST

Despite widespread indignation across West Germany and formal Western diplomatic protests, everyone knew, that more decisive action threatened to initiate a nuclear war. The West was forced to resort to symbolic gestures: 18 On August, the Americans sent General Lucius Clay, an air aid organizer for Berlin, and Vice President Lyndon Johnson. Morale in East Berlin hit rock bottom again due to family separation, and West Berlin faced the prospect of economic problems. for it has been deprived 60.000 skilled workers, who commuted daily from the GDR. They could only be replaced by creating tax breaks, which would attract workers and capital from the Federal Republic. American support for West Berlin reaffirmed in August 1963 year president John F.. Kennedy with the famous words “Ich bin ein Berliner… “, but despite the beautiful rhetoric and ovation of the speech. The West has basically accepted the new status quo.

Starting of 1961 year, East Germany strengthened the border more and more, completely cutting off West Berlin from East Berlin and the GDR province. Wall - specifically two walls separated by the Sperrgebiet (forbidden zone), dotted with watchtowers and patrolled by soldiers and dogs — it became an almost impenetrable barrier. Border guards had orders to kill those escaping on the spot, and they did so often. Nevertheless, there were hundreds of successful escapes before the GDR could improve its techniques; people got over the wall in different ways, usually extremely dangerous.