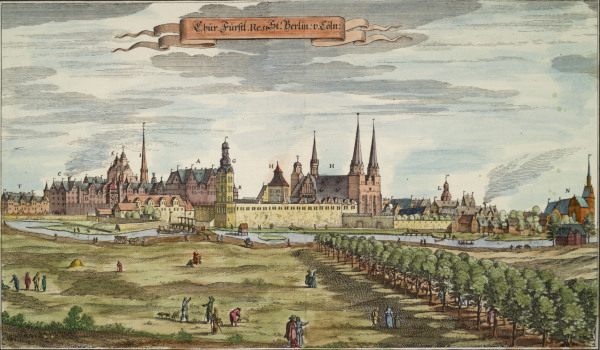 The gigantic task of the post-war reconstruction fell to the new ruler of the Marches, Frederic Wilhelm Brandenburg (1620-1688). Next to residences and public buildings worthy of an electoral capital (seven electors - three archbishops, margrabia, prince, count and king - had the right to elect the Roman Emperor) massive fortifications were also erected. These achievements earned Frederick William the title of the Great Elector. After defeating the Swedes in the Battle of Fehrbellin, 1675 year the March of Brandenburg gained the status of a significant force, so also its capital grew. Recognizing the advantages of having a cosmopolitan population, Elector allowed Jews and South German Catholics to move to the city and granted them full civil rights.

Then came the wave of emigration, which had an even greater impact on Berlin-Colln. Thousands of Protestant Hugonots persecuted in France sought refuge in England and Germany. Arrival 5000 immigrants - mostly skilled artisans or traders - were enlivened by Berlin-Colln, whose own population only numbered 20.000 people. French has become an almost compulsory second language, essential for everyone, who were counting on a social or professional career. Another stimulus for the city's development was the completion of the construction of the Frederick William Canal, connecting Spree and Odra, which increased the importance of the city as a center of trade between East and West.

The father's work was continued by Frederick III, who also took the crown of Prussia (gaining the title of Frederick I.), while Berlin continued to grow. During this period the districts of Friedrichstadt, Charlottenberg and Zeughaus were established (currently Museum fur Deutsche Geschichte in former East Berlin), and Andreas Schluter gave new features to the Elector's palace. W 1709 year Berlin-Cólln finally became one city called Berlin. All this, however, cost money, and at the end of Frederick's reign, both Berlin and the March of Brandenburg were up to their ears in debt.; Frederick even resorted to the help of alchemists in the hope of filling the treasury.

BERLIN FOR THE SOLDIER KING

The next chapter in the history of the city belongs to the son of Frederick I., Frederick William I (1688-1740), called the king of soldiers. He is widely regarded as the father of the Prussian state. He dealt with the financial chaos by imposing Spartan conditions on his subjects and releasing most of the court service. State revenues were directed to the expansion of the armed forces, and culture had to give way to military parades (in the end, Frederick William even banned theater performances). While a soldier was being drilled, the work ethic was forced into the population - Fryderyk used to walk around Berlin and beat anyone caught idle in person.

Fryderyk organized a recruitment to the army, but he had to make an exception for Berlin, because young people fled the city en masse. Nevertheless, Berlin became a garrison city focused on maintaining the army; the Lustgarten park at the royal palace was converted into an exercise ground, every citizen was also obliged to quarters the army. Berlin owes much of its present shape and character to Frederick - squares like Pariser Platz (area in front of the Brandenburg Gate) they were initially exercise yards, and Friedrichstrasse was built to connect the center with the Tempelhof parade square. Few Berliners mourned, when Frederick died supervising the rehearsals for his own funeral (during one of them he beat a stable boy, who made a mistake).