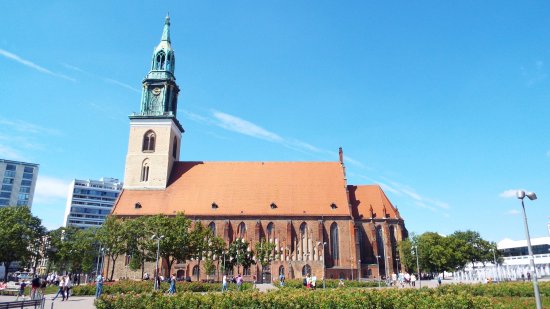 Alexanderplatz is the shopping center of East Berlin. While Unter den Linden epitomizes Berlin's historic splendor, Alexanderplatz and its surroundings certainly epitomize modern splendor, however time will tell, will the concrete juggernaut work just as well, what the neoclassical ventures of Schinkel and his team. To get to "Alex" from the Palast der Republik, walk along the large shopping street Karl-Liebknecht-Strasse. On the other side of the street, there is St. Mary's Church (Marienkirche), A 13th-century Gothic church standing in the shadow of the gigantic Fernsehturm (television tower, codz. V-IX 8.00-23.00, X-IV 9.00-23.00, on the second and fourth Tuesday of the month 13.00-23.00); which dominates the silhouette of Berlin against the sky and looks like a stray space station at the top of a factory chimney. The tower has several advantages: it is a good landmark if you get lost and it has a great view (in completely cloudless weather, the view extends to 40 kilometers, but often the top is shrouded in clouds and you can't see anything at all. There is a Tele-Cafe above the observation deck, café, whose main attraction is this, that it rotates on its axis every hour. When sunlight falls on the dome of the tower, its reflection creates a cross visible even in West Berlin; during the communist period it was a phenomenon, which the authorities of the GDR deplored, behind the wall was called "the pope's revenge". At the foot of the tower there is a thicket of cafes, restaurants and glass showrooms connected by passages. Interesting exhibitions are sometimes held here, and the Espresso coffee shop is where a Berlin youth gathers after a hard day of skateboarding.

The Neptunbrunnen fountain, built in 1891 year and topped with statues of Neptune with friends. The Rotes Rathaus rises behind the fountain (tour Sat. 11.15, 11.30, 12.00 i 12.30, collection at the main entrance), "Red Town Hall", we call it that from the color of the bricks, and not for political reasons. This enormous, almost Venetian building has lost some of its grandeur, since it has been framed on the south-west by new buildings. From the town hall, follow the pedestrianized Rathaus Strasse past the shopping complex to the S-Bahnhof Alexanderplatz. After passing under the railway bridge, squeeze through the isthmus between Alexanderhaus and Berolinahaus, two buildings designed in the early 1930s by Peter Behrens, whose ideas influenced the founders of the Bauhaus. These are the only buildings at Alexanderplatz, which survived the war and now houses a bookshop.

Sam Alexanderplatz, immortalized in Alfred Doblin's novel Berlin Alexanderplatz from the period of the Wiemar Republic (and transferred to the screen by Fassbinder), it's huge, a windswept plane surrounded by skyscrapers. Behrens buildings, that once dominated the area, have long since been eclipsed by the ugly Hotel Stadt Berlin, from which restaurant Panorama Restaurant to 39. the floor has a great view (reserve a table or put the bouncer in the paws - the restaurant is popular, and the food is good) and the even uglier Europaishes Reisebiiro GMBH (d. Reiseiio of the GDR). In the middle of Alexanderplatz bursts the pitiful Brunnen der Vólkerfreundschaft (The Fountain of Friendship between Nations), but a more recognized monument is the Urania clock (World clock) showing the time in different parts of the world and looks like a product of the same architectural school, which gave birth to Fernsehturm.