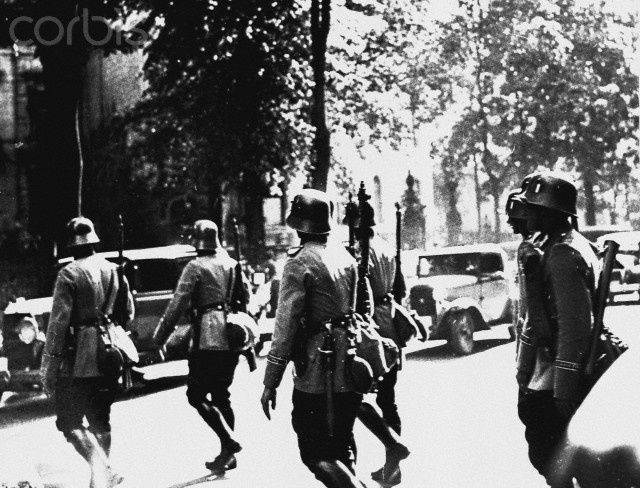 W 1934 During the year, the Nazi brutality was directed inward for a time. Under Ernst Rohm SA it has grown to 500.000 people, which is more than the Reichswehr. The SA felt deceived in the distribution of the spoils after Hitler's victory and began hinting about the”. „Adolf to bydlak. He betrayed us all. Only deals with reactionaries. . . We are revolutionists or not?”, complained Rohm. Big business, regular army and Nazis like Himmler and Gbring were united in their hostility to the SA. Hitler was convinced, that Rohm and his allies were plotting against him and ordered a massive purge later called "Night of the Long Knives”. In the night 30 On June, SA leaders were dragged from the beds of their lovers in Bad Wiessee, was taken to the prison in Stadelheim and shot in the courtyard at the hands of the SS troops; some of them thought, that it was an army coup and he died with the cry of “Heil Hitler!” on the lips. Only in Berlin, an execution was carried out 150 leaders of SA. Rohm's last words before the shooting in Stadelhaeim prison were more on the subject: “All revolutions devour their own children.”

General Schleicher was among the other victims, von Papen's assistants and leader of the radical Nazis, Gregor Strasser. Local police and Gestapo chiefs added the names of their personal enemies to their death lists. Some of the victims had no political ties, such as the Bavarian music critic, whom the firing squad had mistaken for an SA general bearing the same name.

Not counting Hitler, Göring and the army, two Nazi organizations under the control of an unsuccessful chicken farmer benefited primarily from the purge, Heinricha Himmlera . His wearing black SS uniforms (Schutzstaffel — Defense staff), originally serving as Hitler's personal protection, became the nucleus of the Nazi army, while the party's secret intelligence services, SD (Security service, that is the Security Service) began to compete with the Gestapo and the military Abwehr, that is, a military intelligence organization.

After Hindenburg's death that same summer, Hitler merged the offices of President and Chancellor, and proclaimed himself the Führer of the German Reich. Defense Minister von Blomberg agreed to Hitler's request, that all Reischwehr soldiers would swear loyalty to him personally. Having assured Blomberg, that the army would remain "the only armed organization in the nation" Hitler accepted honors from the SS unit Leibs-tandarte Adolf Hitler and the Police Battalion of Hermann Göring, which indicates, that he pursued a divide and conquer policy” even as an undivided Führer.