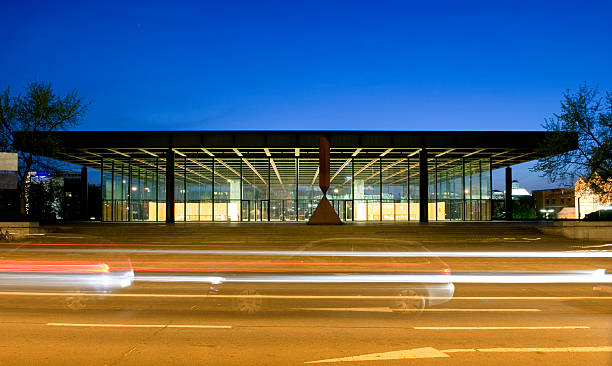 This complex is a recently built complex of museums and cultural institutions, where you could spend the whole day. The Neue Nationalgalerie is by far the prettiest building, Potsdamer Str. 50 (wt.-pt. 9.00-17.00; main collections free admission), black framed glass box, which seems to be suspended in the air, and the expressiveness of shape and detail is worthy of the sublime simplicity of the Parthenon. The building was designed by Mies van der Rohe w 1965 year. The upper part is used for organizing temporary exhibitions, most often contemporary art, while the underground galleries house paintings from the late 18th century. The vast majority of works are the work of German artists, but there are also paintings by foreign painters. The collection begins with portraits, interiors and landscapes of Menzel, and then the more famous works of Courbet. Feurbach's paintings seem typically 19th century and typically German, after them we have the works of Bocklin, the most typical of which is the Castle Ruins Landscape. After a group of brightly painted paintings by Lovis Corinth and several works by Monet, we go to the gallery devoted to the portraits and Berlin scenes of Grosz and Dix, of which stand out Gray Penny's Day and the family of painter Dix. Kirchner spent some time in Berlin before the First World War and his Potsdamer Platz dates back to 1914 year, but nothing specific to Berlin is there. There are also works by artists like Miró (The blonde is waiting at the funfair), Klee, Kareł Appeal, Joasper Johns i Francis Bacon, all in all, a nice and accessible exhibition.

To the north of the Nationalgalerie rises Mattnaikirche, a lonely building in the areas razed to the ground during the war, which now serve as the parking lot of the Berlin Philharmonic, whose director he was up to 1989 roku Herbert von Karajan, when he went into forced "retirement."”. Looking at the gilded ugliness of a building designed in the 1960s by Hans Scharoun, it is not difficult to guess, where did the nickname "Karajana Circus" given to the Philharmonic by Berliners come from. The ticket office is open from Monday to Friday 15.30-18.00, on Saturdays and Sundays 11.00-14.00 (261-4843), but the chances of getting a ticket to some major concert are slim, unless you book several months in advance; however for great acoustics, it is worth going to any concert conducted by guest conductors.

Continuing the musical theme, the Museum of Musical Instruments located just behind the Philharmonic Hall should be mentioned (Musical instrument museum, wt.-nd. 9.00-17.00; Free entrance), which, however, disappoints. Keyboard instruments, wind and string (mainly European) from the fifteenth century to the present day are numerous and very well displayed, but there is a philosophy of “don't touch the exhibits” and the guards vigilantly set their ears for the slightest clank, which is a complete parody of this kind of exhibition. You have to be content with the tapes, which give some idea of ​​the wonderful and bizarre sound of the old instruments.

The Kunstgewerbemuseum is much better (wt.-nd. 9.00-17.00; Free entrance), encyclopedic, but even interesting collections of European arts and crafts. The upper floor covers the Renaissance, Baroque I Rococo (great silverware and ceramics) and works from the Jugendstil and Art Deco period, especially furniture. The ground floor houses collections from the Middle Ages and early Renaissance with some great achievements of goldsmithing. However, the biggest reward awaits you after you go underground: we have a small one here, but a wonderful exhibition of Bauhaus furniture, brilliant contemporary jewelery and an exhibition devoted to the evolution of design.

And finally, the Staatsbibliothek, (pn.-pt. 9.00-21.00, under. 9.00-17.00; admission for all) on the other side of Potsdamer Strasse it has over 3 millions of books and an inexpensive cafe, and sometimes exhibitions are held here. Besides, the building is known for this, that it was designed by Hans Scharoun and is considered his most successful work among the lovers of this architect.