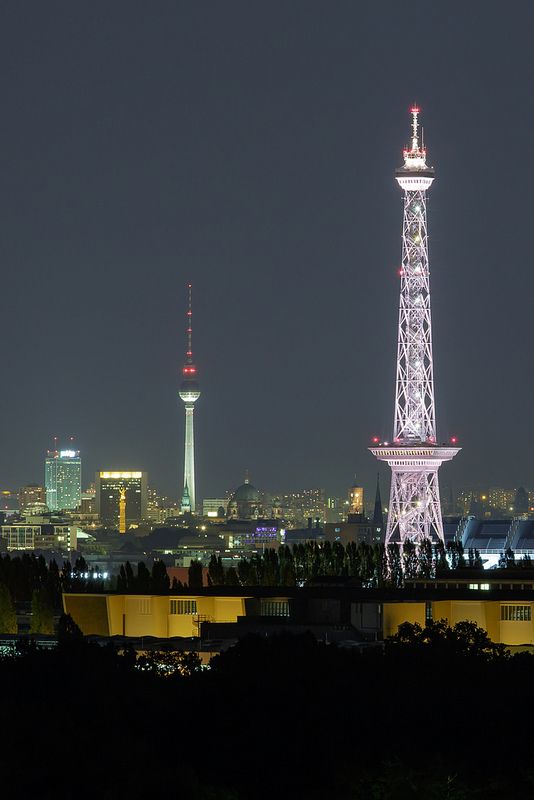 Berlin To the west: radio and television tower, Olympic stadium and beyond

To the radio and television tower (Radio tower) west of Charlottenburg easily reachable by underground # 1 and towards Kaiserdamm or by buses # 66, 92 or 94, from the Zoo Station. From 1928 year, when the tower was built, Berliners like to come here, to observe the landscape from a height 138 meters of the viewing platform (codz. 10.00-23.00; 4 DM, students 2 DM). Right next to it is the aluminum clad monolith of the International Convention Center; and behind the desolate and weedy areas crossed by U-Bahn tracks, you can see the silhouette of the city in the distance - a captivating view at night.

It may happen, that you will have to queue for the elevator to the viewing platform: The Museum of Radio and Radio Broadcasting is much less popular (wt.-sob. 10.00-18.00, nd. 10.00-16.00; Free entrance) located in a former studio. There are all sorts of antiques there, receivers in bakelite housing, what your grandmother might have kept on the sideboard. An exhibition devoted to the development of radio receivers, turntables and televisions from the beginning of broadcasting in Germany in 1923 years to World War II is as much a history of technology as design. Several rooms have retained their pre-war decor, The first radio studio in Germany was also reconstructed.

To get to the Olympic stadium from here, hop back on the U-Bahn # 1 and travel three stops west to the station of the same name, from where to the stadium (from 8.00 until sunset; 2 DM) you are walking fifteen minutes on a marked road. The stadium was built in 1936 for the Olympic Games and is one of the few surviving post-Nazi buildings, anyway, still fulfilling its function. Hitler took advantage of the propaganda opportunities, provided by the Games in order to present the "new deal" in Germany in the most favorable light. Anti-Semitic propaganda was suspended, anti-Jewish posters were removed, German athletes of half-Jewish origin were allowed to participate in the games, and when (for the first time ever) the Olympic Flame was transferred from Athens by a relay, the world saw on the cinema screens cheering crowds with swastikas on their arms waving Nazi flags. It was possible to get an impression, that the new Germany is rich, happy and standing behind the Fuhrer.

Although the games themselves were perfectly directed (which is reflected in the poetic and terrifyingly beautiful film by Leni Riefenstahl Olympia), not everything went according to the wishes of the National Socialist ideologues. Black American athletes did very well, Jesse Owens himself won four gold medals, defying the Nazi theory, that Negroes are "subhuman", and the Aryan race is invincible. But in the end, Germany won the most medals (there is a memorial plaque on the west side of the stadium telling about it) and the Games were considered a great propaganda success.

Go southwest down the street named Jesse Owens and then turn right onto Passenheimer Strasse, and you will reach the Glockentrum, that is, the bell tower (IV-X codz. 10.00-17.30; 2.50 DM). After the war, the tower was rebuilt and it deserves attention due to the magnificent views spreading from its top, not only to the stadium, but also to parts of the Grunewald forest in the south.

The Teufelsberg dominates the area (Devil's Mountain), a huge mound topped with a scary fairy-tale castle, which serves as the American signaling and radar base. It is an artificial hill: at the end of the war, the debris from completely destroyed Berlin was transported to a number of places around the city.

Under the poplars, maple trees and ski slopes are approx 25 million cubic meters of old Berlin and awaits the interest of future archaeologists. To the north there is the natural amphitheater Waldbiihne, where concerts are held in the open air (see "Music and Nightlife").