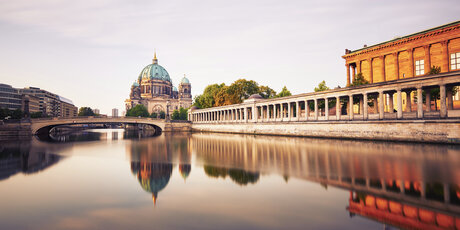 From Unter den Linden via the Marx-Engels-Brucke Bridge, you will get to Marx-Engels-Platz, where the Imperial Palace used to be, whose remains were demolished after the war. Only the balcony has been preserved, from which Karl Liebknecht announced 1918 year the outbreak of the German Revolution and which was incorporated into the Staatsrat building (State Council) on the other side of the square. Marx-Engels-Platz is now the backbone of a large island on the Spree in the city center. North-west part of the island, departing in the shape of a peninsula from Marx-Engels-Platz, is called Museumsinsel (Museum Island) and here are the most famous museums of East Berlin. A few words of caution: many departments are closed for "technical reasons" that are not explained, and all museums, except Pergamon, are closed on Mondays.

The best collections are gathered at the Museumsinsel, which avoided destruction and looting during the war and occupation. North of Marx-Engels-Platz is the Old Museum (Old museum); (Wed-Sat. 9.00-18.00, pt. 10.00-18.00), another building designed by Schinkel with strong neoclassical influences, which now houses an art museum. The post-war department was sponsored by the authorities to create an impression, that there was such a thing as GDR art. Only quasi-religious works by Albert Ebert break out of the box, or conventional experiments represented by other artists. If you are lucky, you can check out the Kupferstichkabinett, large collections of engravings and graphics, including 57 wonderful illustrations for the Divine Comedy by Botticelli. There are also works by Rembrandt, Diirer and Lucas Cranach. In the section devoted to 19th and 20th-century German graphics, works by Kathe Kollwitz and Max Slevogt are collected: there is also a section with Daumier's artwork, Lever, Degasa, Family, Renoira, Muncha and Toulouse-Lautreca.

Right behind the Altes Museum is the Neues Museum, one of the few remaining war ruins in East Berlin, which is gradually being rebuilt, to shelter collections not found in other museums. The Nationalgalerie is right next door (Wed-Sat. 9.00-18.00, pt. 10.00-18.00), a bit too exuberant example of post-Schinkel neoclassicism, which now houses the largest art collection in East Berlin. The 19th-century section on the ground floor is full of boring portraits and landscapes, which is the legacy of the conservatism of Emperor Wilhelm II, who refused to buy more avant-garde works. Not counting a couple of Caesannas, the Impressionist collections are very scarce, which the museum owes to the Kaiser, all in all, the whole gallery on the ground floor is quite uninteresting. The 20th-century art gallery has quite a collection of expressionists, creators from the Bauhaus and the Neue Sachlichkeit group (New matter-of-factness) and includes works by expressionist groups from Dresden and Munich, The bridge in Der Blaue Reiter. It is also worth taking a look at the work of Otto Dix, politicized John Heartfield photomontages from the 1920s and 1930s and expressive realistic sculptures by Ernst Barlach.