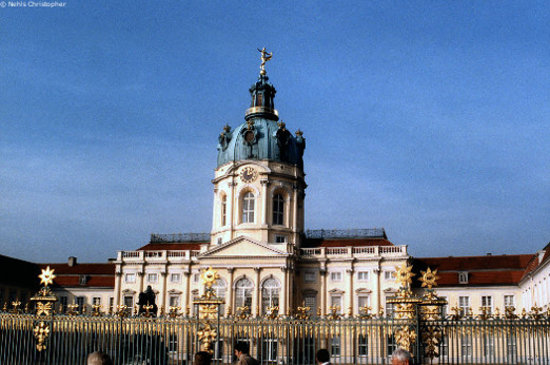 The Charlotenburg district stretches north and west of the city center and extends into the forests of Grunewald. There are many attractions in the western part (described in the "Suburbs" section), but by far the most important destination for tourists' pilgrimages, for which you need to spend at least one day, there is the Charlottenburg Palace and the museum complex on the Spandauer Damm. The castle is magnificent and presents a bit of a surprise after the monotony of modern streets. Ordered as a country seat by Queen Sophie Charlotte in 1695 year (the name of the district is also derived from it), the castle was expanded and supplemented in the 18th and early 19th centuries, and the last strokes were made by master Karl Friedrich Schinkel. When you enter the main courtyard, you face the statue of Frederick William, Great Elector, cast in one part in 1700 of the year by Andreas Schliiter. The entrance to the castle is located right behind the statue (wt.-nd. 9.00-17.00; admission 6 DM, students 3 DM, valid for all other castle buildings: the nearest buses #54 i 74). The main part of the castle can only be visited with a guide, commentary in German only. As you stroll through the magnificent rooms and bedrooms, full of gilding and carvings, pay attention to the porcelain room with porcelain trinkets up to the ceiling and the chapel, which features a portrait of Sophie Charlotte as the Virgin ascend to heaven.

You have to remember, that most of the castle is not genuine, but a post-war reconstruction. This is most evident in the Knobelsdorff Wing, to the right of the castle entrance when viewed from the front; upper halls, such as the rococo "Golden Gallery" are so perfectly chiselled, that it is impossible to be fooled. The neighboring "White Room" is more interesting, whose damaged 18th-century painting on the ceiling has been replaced with a witty contemporary paraphrase.

Downstairs in the Knobelsdorff wing is the Galerie der Romantik (wt.-nd. 9.00-17.00; Free entrance), collections of 19th-century paintings by masters of German Romanticism. The works of Caspar David Friedrich are the most poignant, which show the artist's spontaneous and religious approach to the landscape. This is most evident in the paintings of Morgen im Riesengebirge and Der Watzmann, where the impression is made, that some mighty one, primordial force emanates from the canvas. Typical of his reflective, romantic sensibility is the Monastery among the oaks with 1809 year, probably the most famous painting by Friedrich. Karl Firiedrich Schinkel designed a monument to the victims of the war in Kreuzberg, but it is better known for its neoclassical Altes Museum and many other buildings in the former East Berlin. His paintings are characterized by the precision of detail, gothic fantasies, often against the backdrop of the sea: The Gothic church on the coastal cliff is perhaps the most reflective and poignant. Watteau's paintings hang in another part of the gallery, including two of the best of his works. Journey to Cythera and the Sign of Gersaint's antique shop - delicate rococo trifles imbued with sadness and compassion. Look for Eduard Gaertner's topographic drawings of Berlin in the early 19th century and visualization, how successful was the project to renew the avenue Unter den Linden carried out by the authorities of East Berlin.

The orangery used to be adjacent to the west wing of the castle (significantly impoverished after the war), now it houses a gallery, where important exhibitions are organized. If you don't like the current repertoire, It's hard to find a better way to spend a lazy morning in Berlin than to stroll through the castle gardens (codz. do 21.00 in summer). Founded in the French style in 1697 year, at the beginning of the 19th century they were transformed into an English-style landscape park; after serious war damage, the original baroque form was largely restored. Although you can buy a garden plan in the castle, it is quite difficult to get lost walking through the park towards the lake and further, where the atmosphere of an English park really prevails.